Tuesday - May 24, 2022
On Newport
Your One Stop Site For Everything Newport, Rhode Island
Home » Reviews » Movie Reviews » A Comedy of Terrors

A Comedy of Terrors 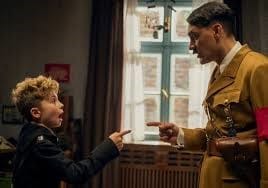 Anything can be funny, right? There are two schools of thought, there. The first is the theory that anything has the potential to be amusing. Comedy is all about puncturing bubbles of pretention, going after targets that deserve skewering. As long as the joke teller is punching up instead of punching down, the only limitation is their imagination.

The other school of thought is that some subjects are too sacrosanct to be mocked and to even attempt them is, at best, in poor taste. We wouldn’t dream of making fun of the Nazis, right? Ah…as a matter of fact, we would! There’s a long and proud history of viciously clowning the dipshittery of the Third Reich in general, and of one Adolf Hitler in particular. A few examples of this: 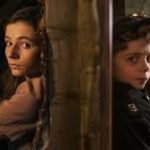 It’s true that Hitler and the Nazis were the greatest evil of the 20th century. It’s also true that they were just as ridiculous as they were destructive. Look at the dopey uniforms, the pompous speeches, the fact that the people calling themselves the master race weren’t even attractive enough to appear in a Sears catalog. With the disturbing parallels between the Nazis and the current political climate, filmmaker Taika Waititi decided it was high time to remind us of the balance between humor and horror in his new film Jojo Rabbit.

We’re introduced to Jojo Betzler (Roman Griffin Davis), a ten-year-old boy living in Germany during the closing days of World War II. While other boys of his age obsess over cowboys or movie monsters, Jojo positively adores the Nazis. To say he’s a superfan is an understatement. Jojo has plastered his room with clippings and posters from the Third Reich, and one of his childhood dreams is being fulfilled. He’s going to a Hitler Youth camp!

The place is run by the semi-permanently drunk Captain Klenzendorf (Sam Rockwell) and Fraulein Rahm (Rebel Wilson). There, the kids will learn valuable skills preparing them to be cogs within the German war machine. It should be a glorious experience for Jojo, as he’s there with his best friend Yorki (Archie Gates). It isn’t, because after he’s told to strangle a bunny and refuses, the boy earns the nickname Jojo Rabbit. 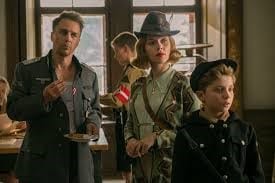 Things are even tougher at home. His sister Inge has died from influenza, and his father is overseas, pursued by rumors that he’s a military deserter. The men left in his town are a collection of goofballs so useless that they can’t even be used as cannon fodder. That leaves Jojo with his mother, Rosie (Scarlett Johansson), a loving woman doing her best in trying times.

At least there’s one person who completely understands what Jojo wants. That would be Adolf (Taika Waititi), Jojo’s imaginary friend who bears more than a passing resemblance to a certain Fuhrer. Adolf pushes Jojo to be a pliant Nazi, but when he discovers his mother is sheltering the Jewish girl Elsa (Thomasin McKenzie) in their home, his beliefs get pushed to their limits.

To be sure, a chunk of people will never see Jojo Rabbit. A comedy about an adorable Nazi is kind of a big lift for some viewers. I get that and ask you to push past it anyway. Director Taika Waititi took the trainload of money he made from Thor: Ragnarok, and made a film combining his own zany sensibilities, the oeuvre of Wes Anderson, and a perceptive look at the rise of a nationalistic movement that’s both foolish and frightening.

You’ve seen World War II movies where Germany is shown to be a dreary land of grays and blacks. Waititi did his research and found that wartime Germany was actually highly stylish. His characters wear costumes that pop off the screen, portraying a seemingly joyful culture that’s rotting from within. Waititi pairs clips of ecstatic fans from Triumph of the Will along with a German-language version of “I Wanna Hold Your Hand,” showing us people willingly succumbing to the Nazi ideology. While his film pulses with energy, he makes sure we understand the very real stakes, and we can feel the shadows of the war and the Holocaust pushing on the margins. 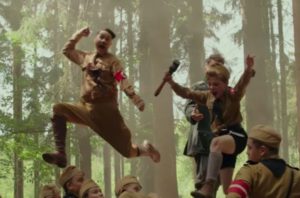 Waititi is a very smart guy, and he again proves that with his hilarious and perceptive screenplay. He keeps his focus on Jojo at all times, allowing us to see wartime Germany through the filter of a boy. We’re also reminded that Jojo isn’t stupid, merely gullible. Scenes between him and his mother feel alarmingly close to the conversations that must happen with the parents of members of the Alt-Right. Additionally, his sequences between Jojo and Elsa are sharp. To gain favor from Klenzendorf, Jojo decides to write an exposé, and he interviews Elsa to learn her “Jew secrets.” It slowly transforms into a game, and as they play the game, Jojo learns that the girl he was told was a monster is actually a new friend.

The cast is uniformly excellent, and they all dial into a tone of absurd realism. I never knew how much I needed Scarlett Johansson playing a mom. She’s equally loving and sarcastic, and like all the best mothers, she allows her children to get away with only so much. Thomasin McKenzie’s Elsa has spiky edges and a genuinely sweet center. Child actors tend to, unfortunately, be not so hot, and that’s because directing children is difficult. The partnership between Waititi and Roman Griffin Davis is outstanding. As Jojo, Davis does something fairly incredible. He’s playing a likable and sweet boy who, at least initially, completely buys into the Nazi ideology. To play a character like this without making him loathsome takes no small amount of skill.

Let’s also take a moment to talk about Taika Waititi’s performance as Adolf. He’s a loudmouthed clown, constantly making terrible suggestions and offering Jojo cigarettes. His performance is over the top, nearly too much. I loved the outlandish energy he brought to each scene, and I loved just as much the half-Jewish, half-Maori Waititi playing Hitler, a fact sure to enrage white supremacists.

Jojo Rabbit is about the seductiveness of nationalism. It’s easy for propaganda to spread, for normal people to adopt outlandish ideas, and for a mean joke today to transform into ethnic cleansing tomorrow. Taika Waititi knows that, and his comedy shows us that an ideology thought dead in 1945 is alive and well in 2019.

Tim Brennan
Tim has been alarmingly enthusiastic about movies ever since childhood. He grew up in Boulder and, foolishly, left Colorado to study Communications in Washington State. Making matters worse, he moved to Connecticut after meeting his too-good-for-him wife. Drawn by the Rockies and a mild climate, he triumphantly returned and settled down back in Boulder County. He's written numerous screenplays, loves hiking, and embarrassed himself in front of Samuel L. Jackson. True story.
Tagged: archie yatesjojo rabbitrebel wilsonroman griffin davisSam Rockwellscarlett johanssonstephen merchanttaika waititithomasin mckenzie
OnNewport.com is a directory and information guide for Newport, Rhode Island.
Discover the best of Newport shopping, restaurants, night life, breweries, events, business, outdoors, fun, local life, real estate, transportation, jobs, and schools.
Looking for what to do in Newport? OnNewport.com has columnists, and bloggers to keep you up to date on the best of Newport, Rhode Island.